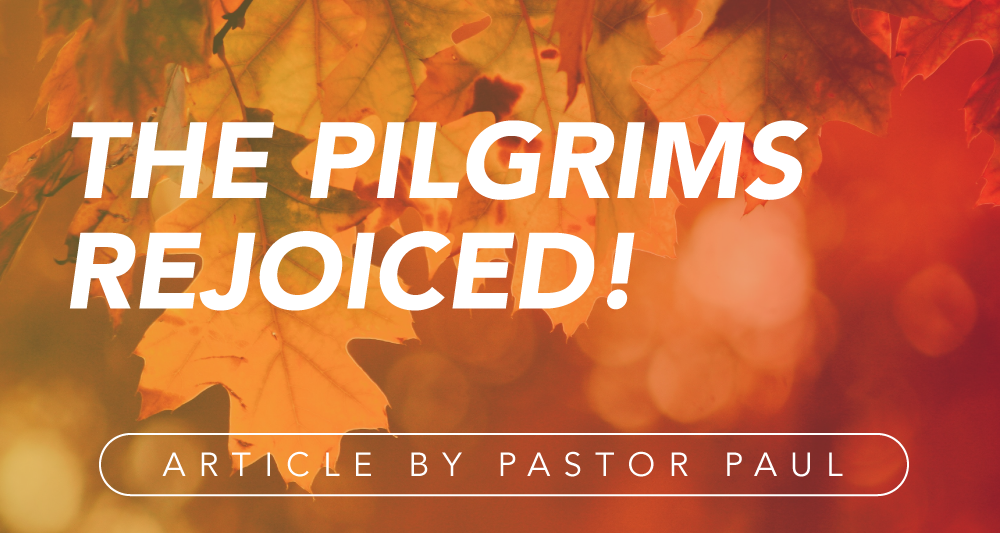 1 Praise the Lord! I will give thanks to the Lord with all my heart,
In the company of the upright and in the assembly. (Psalm 111:1 – NASB95)

On Sunday we will study Psalm 111, an encouraging psalm giving us the ABC’s of Praise and Thanksgiving. It should be a fitting conclusion to a long weekend of thanksgiving to our great God and King. Below is an article I have on file about Thanksgiving Day and what it was like for the Pilgrims. I searched but could not find the author of this article. I hope you will reflect on what the Pilgrims went through so that they might advance the gospel of the kingdom of Christ in the remote parts of the world. It is our privilege to build upon their foundation. May we be found faithful and thankful!

On Thanksgiving Day, many Americans will gather with family and friends around a dinner table that will contain a feast that would have been the envy of many kings and princes in ages past. Despite the political, economic, and cultural challenges we face … we are still blessed to live in the United States of America.

The Apostle Paul reminded the Thessalonians of the need to not only rejoice in the midst of challenges, but to be thankful. “Rejoice always, pray without ceasing, and in everything give thanks; for this is the will of God in Christ Jesus for you” (1 Thessalonians 5:16-18). When I read this passage, I can’t help but think of the Pilgrims. In October of 1621, William Bradford, Governor of Plymouth, declared the first official day of Thanksgiving. The public proclamation on behalf of the Pilgrims came as a result of their first bountiful harvest. The Pilgrims were overflowing with gratitude to God because the harvest of 1621 provided more than enough corn to see them through their second winter.

History records that Indian chief Massasoit arrived unexpectedly a day early for the celebration. The Chief brought 90 Indians with him — causing the Pilgrims to nearly despair, questioning whether or not they could feed that many without dangerously diminishing their winter supply of food. As it turned out, the Indians had arrived early so they could hunt and contribute to the feast. The Indians provided five dressed deer and more than a dozen fat wild turkeys. There was plenty of food — which was even more of a reason to give thanks. In fact, that’s what they did; they extended the Thanksgiving celebration to three days. But what were they giving thanks for?

The Pilgrims’ journey began in Holland — not for religious freedom, as is often cited, but for the freedom to build a community on biblical principles for their children. They had left England, where they did not have religious freedom and moved to Holland where they were free to worship as they pleased. But the culture was so corrupt; they made plans to go to the New World. What was that journey like? One hundred two Pilgrims had been crammed into a space on the Mayflower that was about the size of a volleyball court. Compound that misery with the lack of light and fresh air (all the hatches had to be battened down because of stormy weather) and a limited diet of dried pork, dried peas, and dried fish, and the stench of an “ever fouler bilge” which lasted for 66 days at sea.

They arrived in the fall of 1620 just in time to prepare for winter. During that first winter, nearly half of the 102 pilgrims died — 47 in all. In February, at the height of winter, they were dying at a rate of two per day. Thirteen out of 18 of the wives died, with only three families remaining unbroken by death that first winter. Yet even still, they were thankful. And they remained thankful even though at times their daily rations consisted of one kernel of corn.

The experiences of the Pilgrims were recorded in the historical work Of Plymouth Plantation, penned by their leader, Governor William Bradford, who said of the Pilgrims, “Last and not least, they cherished a great hope and inward zeal of laying good foundations, or at least making some ways toward it, for the propagation and advance of the gospel of the kingdom of Christ in the remote parts of the world, even though they should be but stepping stones to others in the performance of so great a work.” The Pilgrims had the ability to rejoice and hope even in the midst of death and privation because they knew their lives served a greater, eternal purpose. When we know and follow Jesus Christ, our lives have that same eternal purpose and that alone gives us a reason to rejoice and be thankful.